This location is temporarily closed. Please check back for further updates. 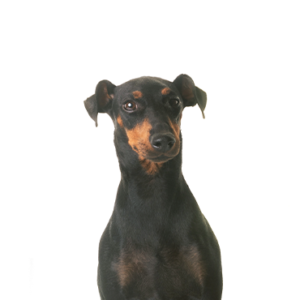 This spirited dog breed is a true terrier, it looks unique with a slew of features. Smooth-haired, generally healthy, loves a good chase which makes it an agility rockstar. Manchester terrier comes in both the toy and standard version, with a black and tan coloration. Curious, active, and won’t turn down the chance to explore. Discover more about our Manchester Terrier puppies for sale below!

Many see this breed to be a smaller version of the Doberman, but they have no shared heritage. This dog breed is the oldest of all the well-known terrier breeds.

They’re mentioned in books that existed as far back as the 16th century. In the early 1800s in England, Manchester terrier made a name for itself, when sanitation was poor, and rats were a menace to the society, the black and tan terrier was used for rat baiting sport and rat coursing.

In an attempt to produce a breed that will excel at both sports, John Hulme crossed a black and tan terrier with a whippet. The Manchester district of England was the breeding center of the little terriers, which brought about the name “Manchester Terrier”.

Manchester terriers are known to have an independent and stubborn temperament, full of energy and self-confidence. A social creature that enjoys the company of their people.

They’re amenable to training and feel like they rule the world, if you don’t change that perception early enough you might end up with a four-legged Napoleon. Very protective, devoted, discerning, and needs to attend obedience classes early enough.

They’re also very keen and intelligent. Being well socialized is important to avoid timidity, and they need an active owner.

These dogs are classic terriers, due to their stubborn nature, crate training is recommended. Manchester terriers are great watch dogs which makes them a perfect fit for a family pet.

They bark, dig and can sometimes be destructive, that is why you need to always look out for them. They’re reserved while around strangers but cool with kids and other dogs.

Gerbils, rabbits, and hamsters are prone to death if seen around them. In the home, they need a soft bed most times for that feeling of belonging. They bark too much and should be kept in an area away from the neighbors.

This dog breed is very demanding when it comes to exercise. They require at least an hour of exercise each day, from daily walking with human, jogging, this is to maintain their manual and physical health.

It can enjoy relaxing with the owner on the sofa, while playing games or may choose to play around. They’re swift, active and require regular exercise to avoid obesity while maintaining their cute nature.

Manchester terriers are quite easy to maintain. They look forward to this period because it’s a bonding time for them and their loved ones (the owners). Seasonal flea treatment is vital, an occasional bath to keep it looking dapper, you can brush the fine coat once a week with a bristle brush.

Brush their teeth at least twice a week, trim the nails to maintain proper joint alignment, clean Manchester’s ear weekly to remove wax and debris that cause ear infections. The eyes shouldn’t be left out, they’re highly recommended for beginners because of their simplicity in maintenance.

The unregulated breeders who are selling outside of the USDA regulations and without a license are what we consider to be “Puppy Mills.” We are committed to offering Manchester Terrier puppies who will grow up to become important members of your family. We only purchase puppies from the very best sources, and we stand behind every puppy we sell.

This breed has very low chances of biting humans, but the few times they do, there is a tangible reason for it, like; protection.

Can Manchester Terriers be used as a protection dog?

In history up to the present era, there has been no record of a Manchester being used as a fighting or combat dog. They were only used to kill rats in the 19th century, and the sport was banned after a while.

This dog breed isn’t the best for office environments, they’re not office-friendly.

What is the life expectancy of a Manchester Terrier?

They have a very long life expectancy, and many live as long as 18 years, which makes it best for a family pet.

How much do Manchester Terrier’s shed?

They have a moderate amount of hair shed due to its texture, the shedding is minimal.

A short-coated dog breed, black, small, with a stylish tail. Sleek, elegant and wedge-shaped head with a keen look, and a smooth, muscular body.

What is the average weight of a Manchester Terrier?

Do Manchester’s have aggressive behaviors to protect their territory?

This dog breed is a protective guard dog, and won’t fail to protect its territory. A good choice for anyone who wants a perfect watchdog.

How much food do Manchester Terriers need?

A quarter of quality dry food twice a day is good for them, with clean and healthy water. If you don’t pay attention to their eating routine they can easily gain weight.

Manchester terriers are very smart, playful, and affectionate. An ideal dog for a beginner who wants a bright and bubbly little dog.

$300 off your puppy when you schedule!